I know I said I wouldn’t do another review for a bit, but…..

ZOMG THIS BOOK IS SO AWESOME!

*ahem* I mean, please proceed immediately to your favourite purveyor of literary indulgences and purchase this delectable volume.

Okay, that didn’t come out quite right. Here, I’ll say it without the bad attempt at purple prose: BUY THIS BOOK RIGHT NOW! 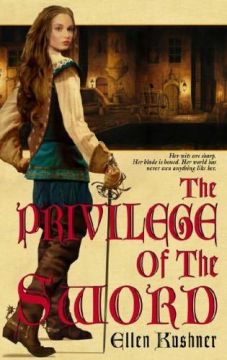 It seems that everywhere I look, people are comparing various fantasy novels to Ellen Kushner’s works. The most recent one I read was Kari Sperring’s Living With Ghosts, which I hated (for various reasons). But then I saw a glowing review of this book on Good Lesbian Books (link to review, BEWARE: contains spoilers) and decided that, well, better late than never to check out Kushner’s novels.

But before I get into the book itself (which is awesome) a little background. The Privilege of the Sword (hereafter abbreviated as PotS) is a next-generation sequel to Kushner’s first novel Swordspoint (and set before The Fall of the Kings). I hadn’t read either of the books before this one, so the story is self-contained enough that a new reader can understand it, but with enough direct references to Swordspoint that the interested reader might want to pick it up before reading this one). Kushner is best known for writing in what has been called “mannerpunk” or “fantasy of manners”. In short, this is a fantasy novel for people who don’t like fantasy (more specifically, who like more politicking and less magic). You won’t find anyone slinging magic around in this book at all. In fact, if you changed some of the place names, this could probably pass for historical fiction that’s just reeeeally inventive. This was one of the reasons I wanted to read this book–I wanted to see if a fantasy novel without magic could manage to hold my interest (and no, Kushiel’s Dart does not count, because the world isn’t completely devoid of magic).

PotS  is the story of Katherine, a country girl (who is nonetheless versed in the rules of civilized society, A.K.A the city) who is sent for by her uncle, Duke Tremontaine (known as the Mad Duke) to learn swordplay in exchange for forgetting about debts owed to him. The book follows Katherine (and a few other characters, more on them later) on a journey of self-discovery, with secrets and scandals aplenty.

I know what you’re thinking. Yes, yes, it’s a coming-of-age tale, one of the oldest ones in the book, but one thing I really liked about this book was the way it neatly subverts your expectations. You might, as I did, imagine that Katherine is the sort of heroine who is sick to death of her boring life in the country and yearns for excitement, only to take to the sword as if she were born wearing one. You know the kind of heroine I’m talking about.

Katherine is not that heroine.

At the beginning of the book, all she wants is what every girl raised in her restrictive society wants: to make a good match, marry, and start having children. When she learns that her uncle wishes for her to take up the sword (including dressing in men’s clothing), she doesn’t get excited, she’s scandalized. Women just don’t do that sort of thing. The reader gets to watch her gradual transformation from scandalized to accepting of her strange role in society, and (most importantly) it doesn’t feel forced, it just feels like another part of growing up.

But Katherine’s story is just one thread of the web of plots that Kushner weaves. The book also follows Alec, the Mad Duke Tremontaine (some may recognize him from Swordspoint) whose story is no less important (and, in some ways, perhaps more important) than Katherine’s. At the beginning of the book, the Mad Duke’s personality is hard to pin down. Is he mad, or is he merely pretending to be mad in order to appear non-threatening, or is it somewhat of both? He’s a very interesting character with more secrets than WikiLeaks. Oh, here, just see for yourself with this quote from the book:

‘Nice try,’ the duke was smiling with the pleasure undoing a knotty problem gave him. ‘But a couple more questions, asked of you independently, and your whole story would unravel. You see”–he crouched down so he wasn’t towering over us–“it’s not street dirt, for one thing; it’s whitewash and garden mud. Your palms are scratched, and this is Robertson gingerbread, with the cinnamon, and that is not sold on the street.’ (p. 201)

Anyways, the third character whom we see a lot of is Artemisia Fitz-Levi, who, like Katherine, has aspirations of finding a noble husband and giving him heirs. For now, what you need to know about her is that she attends a lot of parties and has many “Upper Class Problems”.

Half the fun of this book is watching the characters deal with the demands of Society. In a nutshell, Society is very restrictive. As a “proper” woman, you are expected to marry (a man) and have children and to rely on your male relatives for protection, those same male relatives are expected to defend *their* honor (it’s all but said that women have no honor of their own) when a member of their family is threatened. In the old days, matters of honor were settled by swordfights by trained swordsmen that nobles would keep on retainer, but has since fallen out of fashion somewhat (as you might expect, this is a huge part of the novel). Oh, and homosexuality is scandalous, but no one much cares if you have money and power (especially if you are a man, who generally have more freedom to pursue other men discreetly–or openly, if you have a reputation as the sort of person who enjoys a good scandal).

Actually, let’s devote some time to talking about the sexual aspects of the book.
For starters, most of the characters are bisexual, and when I say bisexual, I don’t mean “I had a fling with a member of the same sex once, but now I’m completely heterosexual” I mean characters spend equal amounts of time with (and even prefer) their same gender partners to their opposite gender ones.

And there is at least one gay character.

That might not seem like such a big deal, but seeing as many settings where “everyone is bi” usually just make everyone bisexual (no exceptions) the fact that there is a character who is specifically referred to as someone who has never liked women is significant. Oh, and yes, there are heterosexual pairings in this book, but most of them are SO. FUCKING. ADORABLE. that you will forget about the bits that each partner has.

Notice how I said most of them….

*sighs* I wish I didn’t have to do this, everyone. I wish everyone could read this book and not have to risk being triggered by it, but I told myself I’d be honest about this, so the next bit may be triggery (re: rape)for some.

In case you didn’t see that:

Okay, so basically what happens is that Artemisia is raped at a party. Wait! Wait! I know what you’re thinking. “Let me guess, they mention it once and then they drop it, right?”

Fortunately, I’m happy to report that the incident is definitely not dropped and Artemisia behaves in a way that I would expect the survivor of such a traumatic experience to react. She cries, she rages, before all this, she was engaged to marry the man, but now she is adamant that she will not marry him despite the wealth and prestige he could bring to her family–a family who, btw, is completely ignorant of what actually happened, and attributes her sudden change in demeanor to pre-wedding jitters. Why doesn’t she tell them the truth? Embarrassment, the perception that she’s “damaged goods” (and no one in Society wants “damaged goods”).

What I really like about this plot is while Artemisia is technically powerless to move against her rapist, she isn’t a passive victim. She smuggles letters (written as if they were two characters from a popular book who are in love) to Katherine (who immediately appoints herself defender of Artemisia’s honor and vows to kill her rapist if Artemisia’s family doesn’t kill him first) and is, as I said, absolutely adamant that she refuses to marry such a monster. You’re free to see this as lesbian subtext or simply two friends looking out for each other.

One other incident of note involves a character who had a really rough childhood (involving, yes, things of a sexual nature) who is obviously still affected by it (so much so that he’s actually triggered by something he witnesses in a brothel, and needs a moment to puke his guts out).

There are other sexual situations, but they’re the kinds of scenes where you know exactly what’s going on but it’s not explicit (hence why some feel the book is appropriate for young adults) and delivered in Katherine’s matter-of-fact way of speaking “The duke’s room was full of naked people….”) that they actually become humourous rather than dramatic. I’d say more on this but then I’d be venturing too close to spoiler territory. Her reaction to feeling desire for the first time is absolutely priceless, as are her reactions to almost anything sexual (apart from the rape, which is definitely not played for laughs). After all, she is a young teenager, and she hasn’t had much exposure to things of a sexual nature.

In short, this book is awesome, and if you can handle the problematic aspects I mentioned above, I’d encourage you to pick this up. I’m definitely getting her other books now.

2 thoughts on “Review: The Privilege of the Sword”