I knew I needed this deck the moment the first images were posted on U.S. Games’ Facebook page. The term “vintage” is applied to a great many things these days. I’ve even seen it applied to my favourite raisin pudding recipe. 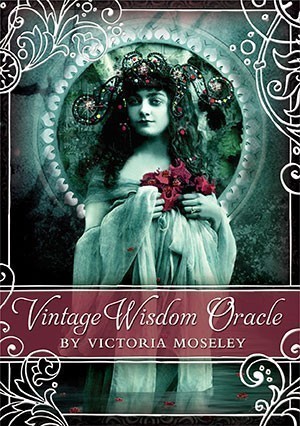 In any case, the Vintage Wisdom Oracle is a deck that combines photographs, paintings, and drawings in collage to form its images. You might recognize John Waterhouse’s paintings or the enigmatic gaze of Mata Hari. Nymphs cavort while their mortal counterparts sit in quiet contemplation. Animals (particularly butterflies) feature in many cards, as do flowers. The colour palette is generally soft (with a few exceptions) and many of the images are sepia photographs with splashes of colour, adding a touch of the dramatic to the luscious imagery. Even the packaging has an air of luxury (silver gilt edges!). If you’re the sort of person with a more conventionally “feminine” aesthetic–flowers, pearls, soft colours, you will probably find a lot to like in this deck.

The cards measure 5 5/8” x 3 ¾” which makes them practically impossible to shuffle with my small hands. The upside is that it’s easier to make out details in the art. Each image is surrounded by a border in gray, mauve, or dark blue. The card backs have a woman’s face in the centre surrounded by a design that reminds me of an old jewelry box, which I feel is appropriate for a beautiful deck with a very old feel. The only words on each card are the card titles. They are non-reversible but the companion book indicates you can read with reversals if you find they are helpful.

The arrangement of the cards in the companion book is in alphabetical order with no images of the cards, only text. There are also a few original spreads:  the four leaf clover spread, the spyglass spread, the penny farthing spread, the walled garden spread, and the chatelaine spread, using four, four, seven, nine, and six cards respectively. I love it when deck creators make an effort to create their own spreads instead of just relying on one card pulls and three card spreads with maybe one spread that’s specifically designed for the deck.

It took me a long time to write this review because I was finding it difficult to connect to this deck. The art is beautiful, but I didn’t find that the messages I was receiving from it were relevant to the question I had asked. Today I happened to draw “Discernment” which is about not dividing your attention too much, and I would say that’s relevant to how I’ve been feeling lately.

I have two major criticisms of this deck. The first is that the characters can seem a bit “stiff” (no doubt because they are from older paintings and photographs). The lady in the “Adventure” card, for instance, doesn’t quite evoke a sense of joy or excitement. I didn’t feel like some of the cards really meshed with the description in the book. The “Healing” card features a vintage “medicine woman” (who is white, so I assume she’s supposed to be a doctor or an herbalist), but the way she is dressed (in pearls) and her expression don’t say “Healer” to me. In fact, she looks like a younger version of my deceased great aunt, dressed for a night on the town. I also felt like this is one of those decks that focuses more on, say, self-actualization than practical matters. It might be of more use to some as a tool for meditation or contemplation than an actual “reading” deck.

The other major criticism I have of this deck is that there are only two cards with characters of colour on them, all Japanese. The companion book refers to these Japanese ladies as “geishas”. I have no way of verifying if the paintings are indeed of geishas, but it struck me as potentially problematic that Japanese women are singled out in this way in an otherwise lovely deck.

Make no mistake, this deck has stunning art and I don’t think I have a more stunning box for any of my decks, but despite its beauty it took me quite some time to connect to it.

One thought on “Deck Review: The Vintage Wisdom Oracle by Victoria Moseley”