As you probably already know, occasionally I like to dip a toe in other genres, but one genre I’ve never really touched is the Western. Westerns, to me, have always seemed to be very masculine and often reliant on some pretty racist tropes, and I’m just really not that interested in the Wild West in general (Canadian frontier life played out differently than it did for Americans, is my understanding.)

However, this title caught my eye, and not just because I found the cover visually stunning, but due to a review on one of my favourite social justice review blogs, Fangs for the Fantasy, who seemed impressed by the level of diversity in the book. 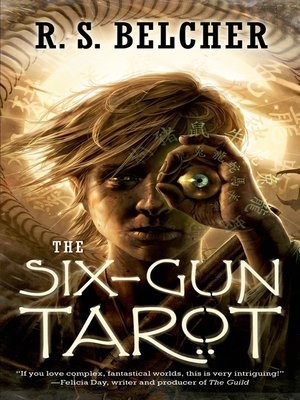 The town of Golgotha is a cattle town in the middle of the pitiless 40-Mile Desert that is host to many secrets and mysterious characters. The sheriff bears the mark of the noose around his neck. Some say he’s a dead man whose time has not yet come, his deputy is kin to coyotes, the mayor guards a hoard of mystical treasures, a banker’s wife is a member of a secret order of pirates and assassins, and a newcomer, a boy with a dark secret, possesses an eye encased in clockwork that is not of this world. It will be up to them, saints and sinners alike, to confront the darkness that is spilling out of the abandoned silver mine overlooking the town, or Golgotha, and all of Creation itself, will never see another day.

The story of The Six-Gun Tarot is told from a variety of (third person) perspectives. In some respects it feels as if the town itself is a character, a place where salt circles and strange rituals exist side by side with church socials (or basically what being a closeted Pagan in a Christian family is like). The cast itself is large-ish but not so large that you need a list of dramatis personae at the start of the book, and even the characters who don’t get a lot of focus are memorable in some way. From the shopkeeper who can’t get over his wife’s death to the incredibly racist doctor (who actually isn’t a doctor, just the closest thing Golgotha has to a doctor) and they all have their own issues to deal with over the course of the book. The mayor. Harry, struggles to reconcile his good, wholesome, Mormon, family-oriented image (including juggling the needs of his two wives) with the fact that he is gay and in love. The banker’s wife, Maude, regrets losing the independence she had when she was younger by falling in love, and worries that her daughter might walk down the same road someday. The deputy, Mutt, faces discrimination from the town’s residents and ostracism from his tribe for his parentage.

I’m including this review under the tarot category not just because of the book’s title, but because each chapter title is a tarot card. Tarotists might enjoy playing “spot the way the card is used in this chapter”. Sometimes it’s obvious, other times less so. Also, pay attention to when the book uses major arcana cards vs. when it uses minors or court cards. Overall it adds an interesting layer of symbolism to the book. The mythology of the book, much like tarot, is very Christian, but eventually opens up to encompass many different traditions in the same way that tarot readers of any faith (or non-faith) can pick up a deck that speaks to them and use it.

Speaking of discrimination, 19th century attitudes towards race, gender, and sexuality are all on display (including use of period appropriate but racist language like “Chinaman”) but what sets this book apart from other books who would include it for “realism” is that none of it goes unchallenged. The aforementioned doctor who goes on a racist rant that could literally have been lifted from a book on eugenics is called on it. Mutt, trapped between two worlds, proudly claims his derogatory name, Maude figuratively and literally rescues her daughter and herself from the patriarchy. Interestingly, one might expect the sheriff, probably the most privileged of the bunch, to be the main character, but he’s actually in the background for the most part, although he does pop up from time to time to make a reference to a supernatural creature or phenomenon that they dealt with in the past. I really liked these moments, because it adds weight to the idea that Golgotha is an odd place where odd things happen.

There were a few things I didn’t like about the book. I thought the Chinese characters could have been fleshed out more, especially given how often they are put down by the white majority in Golgotha. I also thought the description of Ch’eng Huang was straight out of Kill Bill, although I’m glad the author didn’t fall back on the tired old “foreign character speaks broken English” trope. I also felt like the entire subplot with Auggie and the widow could have been cut out and you wouldn’t have missed much, although the resolution is kind of sweet (and also a bit creepy).

As I mentioned before, racism, homophobia, and sexism are very real things in this book. One important background character owned slaves, the Chinese and Mutt experience racism and the characters use terms to refer to other races that would be considered inappropriate these days. Women experience domestic abuse. Harry is called a “sodomite”. There’s also one disturbing scene involving, of all things, tentacle rape, which is the first I’ve seen of it outside of Japanese media. Other reviewers have pointed out that the treatment of Holly/the Black Madonna, a frustrated woman turned antagonist who is incredibly sexually aggressive, to be problematic, which I can definitely see.

Overall, I liked The Six-Gun Tarot despite its flaws. It read more like an urban fantasy with more saloons than what I would think of as a Western. I’m eager to see where the series goes when the sequel comes out in October.