At first I was going to review both of these books separately but now that I’ve read both, I find they work best in tandem for different reasons. So, here is my first (and possibly only) review of two books in one blog post.

As a writer, I’m always looking for ideas and prompts to enhance my writing, and as a tarotist, I’ve had Tarot For Writers on my list for the longest time. I read Tarot For Writers and liked it enough that I ordered Astrology For Writers before I’d finished its predecessor. As the titles suggest, the books are about using tarot and astrology respectively to generate characters, plots, and settings for your writing. For readers who are unfamiliar with either tarot or astrology, the books also serve as introductory material to each and suggest ways to use these esoteric disciplines to enhance existing projects and inspire new ones.

Tarot For Writers is divided into three main sections: “Tarot 101”, “The Writer’s Tarot”, and “A Writer’s Guide to Tarot Cards”. The first part is your basic “Tarot 101” crash course, intended for writers who maybe aren’t familiar with tarot. The second part, “The Writer’s Tarot” is arguably the heart of the book, and discusses how a writer can use tarot cards to generate character traits, plots, and settings, flesh out an existing character, and beat writer’s block (among other things). The third section, “A Writer’s Guide to Tarot Cards” looks at all seventy eight cards in a tarot deck individually, making note of the symbolism in each card and suggesting writing prompts if that card shows up in a reading. Astrology For Writers has a four part structure. The first section covers the planets, the second the signs of the zodiac, the third covers the houses of the horoscope, and the fourth is a quick reference guide if you just want a brief rundown of the different planets, signs, and houses. These aspects of astrology are meant to provide insight on characters, plots, and settings respectively. 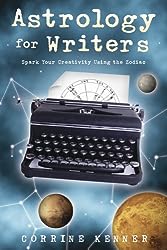 Both books have flaws but there’s something to like in both of them. In Tarot For Writers I liked the fresh take on the Celtic Cross, which assigns each card an element of a “standard” plot structure, as well as the spread that combines tarot and astrology to flesh out a character by drawing cards for each of the twelve houses of the horoscope. I also found the writing prompts for each card interesting although most were pretty self-explanatory. My favourite aspect of Astrology For Writers was undoubtedly the “Twenty Questions” sections at the end of each chapter, which provides questions based on the planets, signs, and houses to flesh out a character (“How is your character’s health?” “Have they ever experimented with drugs or alcohol?”) as well as offering suggestions for scenarios you can play out with your characters “Have your character visit the doctor.” “Make your character choose the lesser of two evils.” I’m always looking for prompts or interesting questions to flesh out my characters, and there are plenty in Astrology For Writers. Each sign also has an at-a-glance chart to help you determine signs that mesh or clash, which is perfect for creating group dynamics, foils, and other relationships.

Both books are not without flaws, however. For Tarot For Writers, I thought more time could have been spent in the section on “The Writer’s Tarot” as that seems to be the heart of the book, and yet, the bulk of the book is dedicated to the third section on individual cards and their symbolism. The section on beating writer’s block really only applies to starting new projects, not breathing new life into existing ones, and there’s almost nothing about using your cards during the editing, proofreading, or marketing phases of your book, and those are definitely some areas where a divination tool like tarot cards could come in handy. My biggest problem with Astrology For Writers was that I feel like the attempts to match planets with archetypes (Venus as the Love Interest, Pluto as the Dark Lord etc.) is too constricting and simplistic. In addition, the book seems fixated on the idea that heroes are helpful, kind, and physically attractive, whereas villains are the opposite, and in general seems to conflate “hero” with “protagonist” (and assume that heroic characters are all solar characters) which as most writers can tell you isn’t always the case. The signs themselves are reduced to familiar stereotypes that you see in many astrology books: Scorpio is sexy and intense, Capricorn is a social climber, etc.  Both books rely on Joseph Campbell’s Hero’s Journey and Gustav Freytag’s plot structure and only a few of the many conflicts that can arise in stories. In short, both books suffer from being a bit too basic to be useful to more experienced writers. There’s also a lot of gendering in both books. To be completely fair, both tarot and astrology have traditionally gendered elements of their crafts in a particular way, but occasionally I found it a bit off-putting, especially in the astrology book.

In spite of these flaws, I enjoyed both books and will add them to my small repertoire of writing tools. If you can only afford one, I would recommend Tarot For Writers if you work with tarot or if you need assistance with plots or settings in particular, whereas I found that Astrology For Writers would be more useful for character creation.  Both books touch on plot, settings, and character of course, but I think the focus makes more sense when you consider how tarot and astrology are used (tarot usually sheds light on situations, astrology is mostly used to look at individuals or pairs). If you are new to astrology, tarot, or writing, either book would be worthwhile to add to your library, but experienced writers in particular might be a little let down by the way the sections on writing seem geared more towards beginners.

This is kind of tangential but I feel like the techniques in the books (particularly the tarot book( could also be applied to Lenormand cards (particularly if you want inside into the day to day of a character’s life or inspiration for a setting). I’d love to see a book on Lenormand For Writers.