“Play Tales from the Borderlands,” said my tumblr friends. “You’ll love it!”

“Do I need to know anything about Borderlands?” I asked. I’m not a fan of shooters, so naturally I skipped the series.

“Nah, you might miss some references but it’s not essential.” 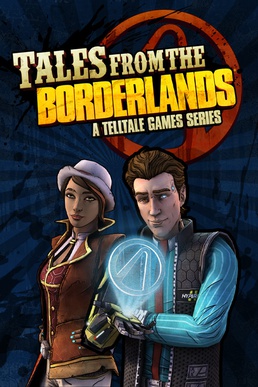 Tales from the Borderlands is one of the more recent titles from Telltale Games. In it, players assume the role of Rhys, a salary man for the villainous Hyperion corporation, and Fiona, a Pandoran hustler, as they chase a case full of cash they both think is theirs, a trail that may lead to one of the planet’s elusive Vaults and the greater riches contained within.

In an age where every other game is “dark and mature” and the environments must contain at least sixty shades of brown, Tales from the Borderlands is a fun, funny, and at times just plain weird ride that manages to be hilarious without insulting several minority populations. Seriously, the game is laugh out loud funny. It was such a treat to play a more lighthearted game after the roller coaster ride that was The Walking Dead Season 2.

Also, this game has one of the cutest robots ever. Cutest. Ever.

If you’ve played the previous adventure games from Telltale (The Walking Dead series, The Wolf Among Us, etc.) you’ll know what to expect: a bunch of pointing, clicking, QTEs, and choices. Some of the consequences of your choices are apparent as soon as you make them, others less so. In fact, some choices you make in the first episode don’t bear fruit until the very last episode. There are also plenty of opportunities to shape the main characters’ personalities. Is Rhys a nice guy who just happens to be working for the “wrong” side, or is he desperate to climb the corporate ladder and will cut down anyone in his way? Similarly, is Fiona only in it for the money, or is she one of the nicer members of the cast? I played Rhys as a nice guy and Fiona as a kind, but sly con artist, and both of them snarky.

As far as things to keep in mind, make no mistake, the game is hilarious, but there’s also quite a bit of blood and gore, and a part of the game requires you to gouge someone’s eye out (the subject of some very dark humor). The blood and gore is no less over the top than the rest of the game, but the characters will definitely end up covered in it at some point. The game also makes use of several “imagine spots” where a character will narrate something spectacularly awesome happening and then be interrupted and asked for the true story. (Note that the game uses a framing device where characters are telling the story of how they got there, so unreliable narrator is a thing.)

The Borderlands series has been highlighted by many reviewers for attempting to be more diverse than the typical shooter, and Tales from the Borderlands is no exception. Although Fiona is a bit more ambiguous and appears to be white-passing at least, Sasha is less so, although it’s possible they’re both biracial. Cassius, Yvette, and Finch are unambiguously black and at least one can end up on your final team. There’s also a character from past games who may or may not be Latino (or its fictional equivalent in the Borderlands universe). Unfortunately, most of the characters of color can die during the course of the narrative, although all but one is mandated by the plot and keeping them alive is just a matter of picking the option that amounts to “don’t let them die”. This isn’t The Walking Dead, after all. In terms of disability, main character Rhys has a mechanical right arm. Unfortunately, the only character of size I encountered in the game is a villain, although they are not played for laughs and are intimidating and badass. There’s also a badass queer lady couple you’ll probably be familiar with if you’ve played the other Borderlands games. In fact, you pretty much can’t be successful in this game without being a badass on some level, that means lots of badass women.

If I had one complaint about this game, it’s that sometimes the way the arrows showing which direction to push curved around in a way that I wasn’t sure which one to push, and during one timed sequence, I was a bit confused as to what I needed to do to select something and ended up with an interesting combination for my robot buddy (it wasn’t a big deal).

In short, this game was a treat, from the hilarious subtitles that pop up whenever you meet a new character, to the over the top shenanigans of two unreliable narrators, Tales from the Borderlands was a game I didn’t think I’d like that much and ended up loving. Check it out if you want something that’s equal parts hilarious and action-packed. I for one hope we get at least two more seasons. Seriously when is Season Two happening, I want it.